Taunton Soul Korfball Club was started in the summer of 2004 by Stuart Allcock. He'd played with Exeter Korfball Club but decided to set up a new team when he moved to Taunton. The first training session was held in October 2004 when 34 people turned up! Admittedly 10 were from Exeter; and the club is very grateful to Tony Fripp and Exeter Korfball Club for their support in getting the club started. 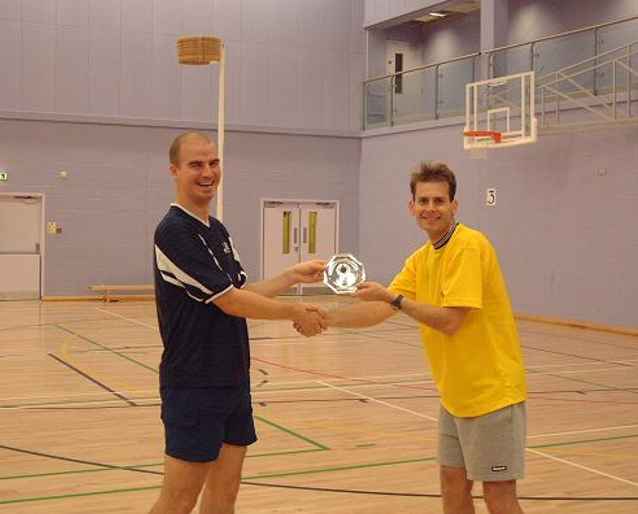 Weekly training sessions followed and the club began to enter teams in local tournaments. In the summer of 2005 we made our first trip to a weekend tournement and travelled all the way to Littleport near Cambridge, although closer venues do exist. Unfortunately, Taunton were the only "beginners" team to turn up and so were in at the deep end, against more experienced teams. We surprised everyone (and ourselves) by winning a match against a team with 2 GB players!

In October 2005 Taunton Soul entered the Excaliber Korfball League, playing teams from Exeter, Bristol and Cardiff. We finished a creditable 6th out of 8 and had a number of close games against teams who finished near the top of the table. The Club has entered a number of summer tournements from Exeter to Oxford to Nottingham and we have managed to reach a couple of semi-finals (although we did aquire the odd ringer - thanks James and Ingmar).

In 2006 the Club was grateful to receive a Sports 'Awards For All Grant', which enabled the club to purchase its own equipment (having been borrowing old posts from Exeter and Bristol) and to acquire some new kit. After the 2006-7 season Taunton Soul's Captain David Hill was voted the "Most Valuable Player in the League" and was picked for the South West Area Team in the National Inter-Area Tournament held at Bristol. Players from Taunton Soul have also helped to make up a team to represent Somerset at the National County Championships in the last few years.

The Club is now playing in the South West Korfball League against teams from Bristol, Exeter and Gloucester. Training and home matches are held at both Bishop Foxes school on Wednesdays and SCAT on Thursdays, both between 8 and 9:30pm.