Taunton start with a win, a loss and a draw 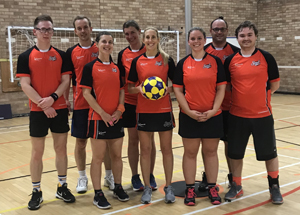 Taunton Soul opened the season with all 3 teams playing at home (SCAT) on Sunday 6th October. There was a great turn out of spectators which warmed the sports hall and encouraged all teams.

What a close opening fixture for Taunton 2 who hosted Bristol Thunder 3. Thunder 3 were promoted last season from SWKA 2 after winning every game so it was clear this would be a close game. The first half was tight with a number of penalties being awarded and executed for both sides. Taunton passed the ball with precision; scoring some excellent long shots and drop offs leaving Taunton just one ahead, 9-8 at half time.

In the second half, penalties kept being called against both sides for contact but Taunton managed to pull the score to 15-11 after a great long shot from Chelsea. However, Thunder pulled it back to 15-15 with just three minutes to go. A fantastic penalty from Jess ended Taunton’s goals while Thunder sunk a final shot leaving the score at 16-16 at full time.

The match showed a great team effort with a number of players stepping up from the 3rds last year.

MVPs were awarded to Jen and Steve.

A special mention to Jess for her 3 superb goals and 100% score ratio on penalties! 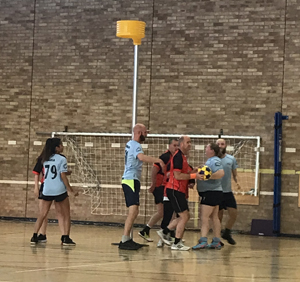 Next up were Taunton 3 who hosted an extremely experienced Bristol Thunder 4. Thunder bought only 7 players meaning Georgie was nominated as Taunton’s non shooter. Taunton remained positive after Thunder’s strong start to the game who scored 10 goals in the first half. After a slow onset, the goals started to drop for Taunton; however, they were left trailing by 6 goals at half time.

The second half read to be a much closer game, with both teams scoring 6 goals each. The final score finished at 10-16.

MVPs were awarded to Chris and Kelly.

A special mention to Georgie who played after giving birth to her son only 3 weeks ago. What a performance!

What an incredible start for Taunton 1’s today winning against an ex regional team 23-5. Taunton started strong with a trademark Dave long shot to commence the scoring. Taunton were full of energy, with a number of strong passes leading to some superb goals off the back of the court. Their lead stretched to 15-4 by half time.

The second half wasn’t quite as dynamic with both teams scoring fewer goals. Tam was so close with her shots rolling around the korf - they just didn’t want to drop. The second half ended 8-1; meaning a final score of 23-5.

MVPs were awarded for Tom and Sarah.

A special mention goes to Rachael and Ben who had their 1st team debuts. Both played with skill and determination.