2 more wins on return to Blackbrook 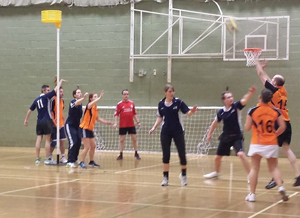 The second team game started well but saw the unfortunate subbing off of Marie Phillips after an early injury meant that Ellie Kowalski had to play the remainder of the game in her place.

The match started slowly with a 2:1 lead at half time thanks to goals by Stuart Allcock and Adam Pitman but it was a lead that Taunton Soul never lost with further goals in the second half by Stuart, Adam and Chris Phillips leading to a quick advancement in the score that Bristol City were unable to come back from. The match concluded with a 7:3 win to Taunton Soul 2. 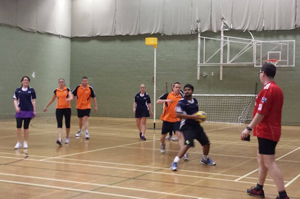 MVP's for the second team game went to Adam Pitman and Sarah Khan.

Next was the first team game which saw Ellie Kowalski play her second full match of the afternoon. This fast paced game demonstrated the teams great trust in one another with some quick passes and aggressive play leading to an early strong lead by Taunton Soul with the score 9:4 at half time.

Bristol City came back from a long standing 11-4 lead but like the second team match it was too little too late for them to steal the win. 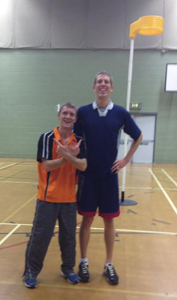 Notable mention to Ben Groves performance in the part as David in David and Goliath when he was paired up against a 6' 5" Bristol player, but undaunted he held his own, even stopping to pose for a cheeky photo with Goliath when play moved to the other end of the pitch.

Also of note, Gabs amazing unbreakable glasses which seemed to spend more time being juggled in the air or bounced on the floor and Ellie's brave return to play after a bump on the head had us all worried but she persevered to the end with a 15:11 win for Taunton Soul.