Let me hear you say BOOM! 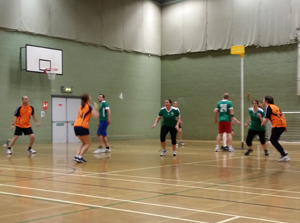 Phillip West making his full match debut, lined up alongside Mark Francis, Sarah Khan and Hannah Hill. Taunton started slowly with Exeter moving into a 6-2 lead, but as the untried partnership of Phillip and Francis began to gel, the rest of the team grew in confidence. Matt Hill stepped up to take a tense penalty and helped to balance the nerves, with Chris Phillips bringing Taunton back to 6-4 at half time.

In the second half Mark Francis converted a free pass, bringing the scores to 6-5. In what proved to be a closely fought second half, Taunton Soul were unlucky in their efforts to bring the game level, with Phillip West coming close on several occasions. Exeter pulled 8-5 ahead, but Taunton celebrated the korf of the match with Matt Hill converting an over the top flick from MVP Chris Phillips, bringing the scores to 8-6. Tireless running from Sarah Khan earned her the MVP for the girls.

Thanks go out to now official team photographer Jennifer Gibbins who expertly captured the thrilling encounter.Taunton Soul 1sts lined up for what on paper would be their toughest match of the season yet. Mark Francis fuelled by Lucozade played his second full match of the day. Within minutes they were 2-0 up thanks to quick thinking from MVPs Dave Hill and Hilary Manning, but Exeter fought back to 2-2.

The benefits of a steady 1st team line out was clear to all, as Dave Hill and Gabriel Carrillo linked up on more than one occasion to catch Exeter napping and convert from under the posts. It was to prove a tense finale with Exeter pulling level in the closing minutes, before Matt Fillary, with the clock counting down, shooting from range to take Taunton to victory and 'shake the room' into a wild frenzy!

"Well played everyone. Let's hope we can keep the wins coming in the new year!"