Taunton Soul start with a win and a draw 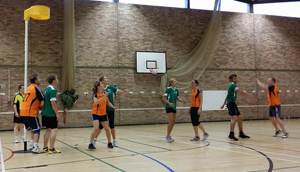 Taunton Soul 1 started the new season with a good 13-7 win over a talented Exeter side. Angela Hill scored the first goal within 10 seconds of the game starting to give the team a lead they would rarely lose with goals from Gabriel Carrillo (5) and Matt Fillary(3) keeping Exeter at bay during the remainder of the game. Hilary Manning also scored 3 goals including 1 penalty. David Hill and Ruth White were voted the players of the match for Taunton.

The 2nd team didn't start as well after such a long summer break but warmed to the task and fought back from 5-2 and 6-4 down with goals from Rachael Holden, Stuart Allcock, Mark Pow and Chris Phillips to draw 6-6. Chris (2 goals) and Sheena Lewis won the awards of MVP.

Next is up is the first Super Saturday of the season with a double header against Horfield.